Carbon Credit
Pine Industries together with our partner MGI Energy Congo is developing one of the largest forest redevelopment projects in Africa, with an area of 660,000 hectares. The Carbon Credits generated by this project will help to lower environmental pollution worldwide. Study, research, and the involvement of the governments of Italy & the Congo Republic make this operation one of the most important projects in Europe and in the world.

What are Carbon Credits?

A carbon credit is a generic term that identifies any negotiable certificate or any authorization that represents the right to emit a ton of carbon dioxide or the equivalent amount of a different greenhouse gas (tCO2e). Carbon credits and carbon markets are one of the components of national and international attempts to reduce and mitigate the growth of greenhouse gas (GHG) concentrations. A carbon credit is equal to one ton of carbon dioxide, or – in some markets – of gas equivalent to carbon dioxide. Carbon trading is an application of an emissions trading approach. 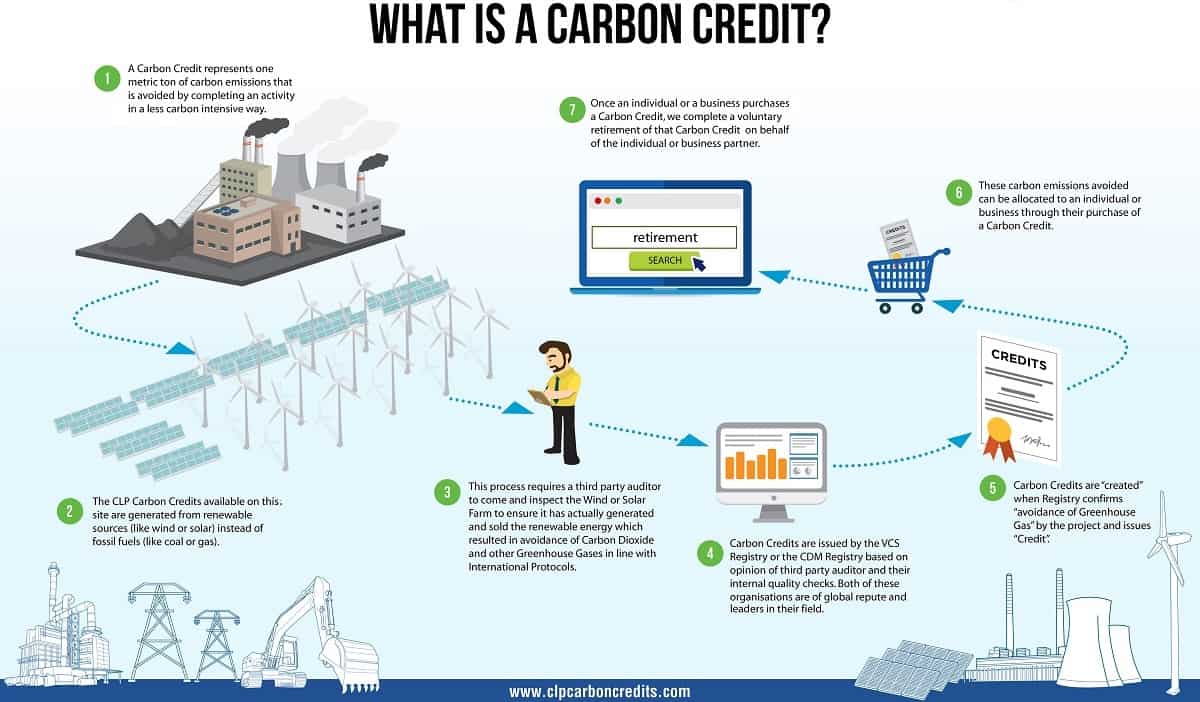 Carbon credits represent a sustainable strategy aimed at promoting national and international projects for the protection of the environment and the climate. Each tree planted absorbs on average between 500 and 1,000 kg of CO2 in its life cycle, which results in emission absorption credits through the certification of a third party. These credits (Carbon Credits) are eligible for placement on the voluntary market and are negotiable. Efforts to reduce greenhouse gas emissions are now essential for industrialized nations to fall within the original Kyoto parameters, and the more recent Paris Treaty modifications, with significant environmental and economic benefits

Why use Carbon Credits?

States and companies that are able to reduce their emissions save money and gain a reputation for being socially responsible. Economically this is beneficial because they manage to make money by being more efficient, and in reputation because they show the whole system how to comply with the rules or to do even better. Let us show you what markets are in operation and what are the means available to the states.

Pine Industries offers people, companies and organizations that wish to contribute to the environment the opportunity to offset all or part of the greenhouse gas emissions produced in their daily lives, in the course of their work, in organising an event, or even creating a product line.

A CO2 credit is equivalent to a ton of CO2 and their value is established by a number of global market exchanges. The Pine Industries Project is not about donations, it is actually about purchases of existing certified Carbon Credits that are used to finance our environmental sustainability projects to remove even more CO2 from the air. Removing carbon dioxide is very important because it also reduces the local presence of other harmful substances that combine to form toxins in the atmosphere.

Carbon Credits from the Lagoons of Venice

There is an obvious global difficulty in reducing the consumption of fossil fuels that increase the concentration of atmospheric CO2, so how can we reverse the trend? We support the development of Carbon Capture and Storage systems, specifically aqueous carbon capture and sequestration. This method employs the natural cycling of brackish water that captures atmospheric CO2 and transfers it to underwater photosynthetic ecosystems (algae and aquatic plants). The lagoon fishing valleys of the Venice region thus collect CO2 and store it, naturally, without any mechanical apparatus, holding tons of CO2 in the muddy subsoil. This natural process is further enhanced by the type of activity in the fishing valley- a yearly cycle of fish, plants, and water. The result is an optimum sustainable environmental management method for the capture of carbon dioxide.

Africa overtakes the Amazon: it is the new green lung of the world

The forests of the Congo absorb a major part of the world’s carbon dioxide emissions. In fact, the great sweeper of the earth’s atmosphere is no longer the dense jungles of the Amazon, it is now the vast forest areas of the Congo basin in Africa. Up until recently, the South American rainforest was considered the most powerful carbon destroyer, but due to deforestation, today this essential work for the health of the Planet is done more efficiently by the forests of the African Continent, which now absorb the largest portion of the world’s CO 2 emissions. This was revealed by a study published in the latest issue of the journal Nature, which publicized the risks associated with the growing weakness of the Amazon in capturing and transforming carbon dioxide into oxygen.

The reasons for this drop are related to massive deforestation, but also to the effect of overheating on the balance of forest ecosystems. “Scientists have always focused on the destruction of forests, but there are also other less visible factors involved in their transformation, which are important to take into account,” says Dr. Hubau, the author of the study, who measured the impact of climate change on tree growth. He also documented the deterioration of intact forest trees by following the evolution of over five hundred parcels of about one hectare, both in Africa and in the Amazon.

These credits are guaranteed and certified through independent 3rd-party verification according to international standards, and gain a PineNeutral certification from the environmental leader, Pine Industries

Any cookies that may not be particularly necessary for the website to function and is used specifically to collect user personal data via analytics, ads, other embedded contents are termed as non-necessary cookies. It is mandatory to procure user consent prior to running these cookies on your website.